I think one of the best (and most unlikely) things about listening to podcasts is when they stop being a solitary activity and you get to see them live. I was so thrilled when I found out my favorite comedy duo and podcasters, Jake and Amir, were coming to Austin for their first annual podcast festival.

They came to Austin at the start of SXSW 2016 and held a podcast festival for their podcast network, Headgum. Headgum hosts a variety of different podcasts, with topics to interest just about everyone. There is one devoted to embarrassing stories (and Allison Williams from Girls was recently on to discuss her first period, 10/10 would recommend listening to this and cracking up), literature you should have read in high school, hobbies, orgasms, TV shows that haven’t been on in years, racism in the movie industry, sports, on and on. My favorite, of course, is Jake and Amir’s “If I Were You,” in which they give hilarious and helpful advice every week. 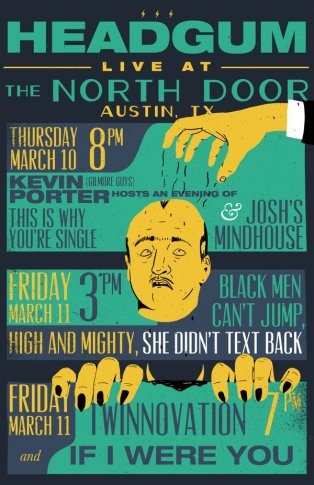 The Headgum line up was hot and heavy over Thursday night, Friday afternoon, and Friday night, and I bought tickets for the Friday night headlining show the moment I heard the announcement. Then a few weeks later, I was checking out my tickets on the North Door venue’s website and started freaking out- Jake and Amir had added a SECOND live show of their podcast on Thursday night with SPECIAL GUEST BEN SCHWARTZ (WOW, Ben Schwartz- I guess most people know him from House of Lies or as Jean Ralphio on Parks & Rec, although fans of J&A know him from their web series and as a fan-favorite guest on the podcast). So, I shelled out another $40 for that show (one ticket for me and one ticket for my partner Scott, who I forced to listen to TONS of “If I Were You” when he was my ride to college my senior year). Then I decided, why not go all the way? So I bought tickets to the Friday afternoon shows, and full HEADGUM STOCK was achieved. 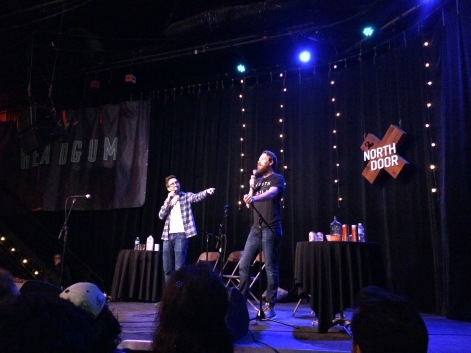 It was so exciting to get to the North Door on Thursday night. The first shows were “This Is Why You’re Single” and “Josh’s Mindhouse.” The whole evening was hosted by Kevin T. Porter, half of my other FAVORITE podcast “Gilmore Guys.” He did an incredible job emceeing the event and I got to meet him & chat afterwards!

It was a REALLY fun vibe at The North Door- energy was high, people were pumped for all the shows and big guest Ben Schwartz. Josh Ruben had astrophysicist Joel Green as his guest, which prompted some UT students in the audience to ask pretty serious questions about space, and the girls from “This Is Why You’re Single” threw fortune cookies into the audience.

All of the shows did a great job, and Kevin did incredible work getting all of us pumped for each event. I got a little too drunk off three whiskey sours and by the time Jake and Amir and Ben came out, I feel like I must have hallucinated the questions about whether or not losing your virginity is ever worth it and the guy who needed advice about scoping out hot moms while eating chex mix. The made-up names for anonymity were decided by the hilarious Gil Ozeri. The episode was recorded and is up on their site, in case you want to experience the craziness for yourself.

The next day, I had a brand new dress from Gypsy Warrior to wear, and headed downtown through the SXSW madness for the early show. We saw “High and Mighty” with John Gabrus & guest Gil Ozeri (this was SO FUNNY), “Black Men Can’t Jump” (they discussed Will Smith & whether or not he pushes Hollywood forward) and “She Didn’t Text Back.” Scott and I snuck out to grab tacos from Whole Foods, put money on the meter, and made it back in time to watch some incredible dancing and rapping from Daren and Will of “She Didn’t Text Back.” They pulled the heads of Headgum on stage, and everyone in the audience danced along with them.

The venue kicked us out after that, and we got back in line in the alley in the rain. A cool UT student shared his umbrella with us, and we discussed his Sri Lankan roots, his middle school addition to Jake and Amir, and why The Game Boy is the best podcast bit. The night was electric with everyone’s excitement, and the house was MUCH more packed for the sold out night show.

First there was “Twinnovation”, which was pretty much off the rails the whole time. The Twinnovation podcast is the Rosenberg twins, of CollegeHumor, and their lifelong friend Mike coming up with schemes and hustles. One of them was dressed as a mad scientist, one of them was drinking a gallon of milk, one of them threw cans into the audience, and they planted a dude to pretend to get sick who spewed mystery liquid on those of us in the aisle seats as he ran to the bathroom (some got into Scott’s eye. Cool bit?).

Then “If I Were You” came out, and the show was awesome. They had a surprise guest come out halfway through, who my UT friend had spotted and pointed out to me (we ended up all sitting together, too). The reason we chose our seats for all three shows was because you could see the backstage balcony, and it was exciting to keep an eye on the ‘stars’ of the night from our spot. The special guest was hugely tall and wearing a white track jacket, and although he looked out of place, there was no mistaking who it was! It was NBA pro RICK FOX! Very todah.

A lot of people had no idea what I was talking about when describing a live podcast festival (someone asked if I just sat in my house and listened to podcasts for SXSW, haha), but I would definitely recommend seeing a live podcast. It’s extremely fun. I would also recommend you check out these Headgum acts, because it’s a talented, funny bunch.