I have spent some time wondering how to recap some of the most fun, most action packed couple days of my life. This past weekend was the biggest events in BMX, and everyone involved in the industry and sport came out. I decided to break down my posts into parts, since so much went on and I don’t want to forget a thing.

So, PART ONE! The festivities began on Thursday, with the

My friend Derek, who I’ve written about this past week, was with us for the weekend on the best stop of his cross-country motorcycle tour to California. The three of us parked in the neighborhood behind North Lamar and headed back behind the bmx shop where we spend so many hours.

There were tons of people, and we jumped right in mingling. It was sunny and beautiful out, and more people just kept pouring down the driveway, arriving for the good time. There was a video premiering, tee shirts being screened for 10 bucks (I got one with a deer on it), and Scott’s former roommate manned the keg. Food was provided by ALC Steaks ON TOUR food truck, with House park staple Scottie taking orders inside.

Our friend Cody was also in town, back in for the weekend after temporarily moving out of Austin. I was very happy to see one of my favorite people to sit at skateparks and be salty with, as you can see. 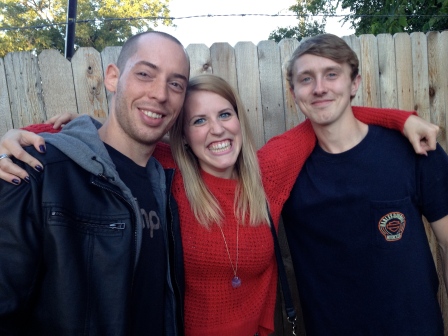 Scott also got to see an old friend from New York (pictured below).

I hung out with the Gnarnia boys while Scott wandered off to say hi to some people, and only Cody noticed my sneaky iPhone photography. 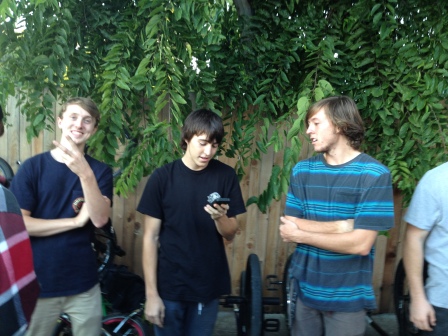 Here’s another shot of the party. So many people!

Derek pointed out that he looked like everyone else, in his Fiend beanie, jean shorts, gnarly tattoos, and pierced ears. In New Jersey, he’s a black sheep. In Austin, he fits right in.

Here’s what I wore. A floral dress and tights, and I had a caramel nut latte with me. Oh so BMX, as usual!

After the party, the three of us were starving and headed out to Bouldin Creek Cafe for veggie burgers. The only way the day could have been better is if my brother was with us instead of out in DC- Timmy, what are you doing going to college when there are Empire parties to attend??