One of my favorite things to make is a homemade pizza with the help of Trader Joe’s.

I live pretty close to a Trader Joe’s, and whenever the mood strikes to have homemade pizza, I head there. I’ll pick up the bag of whole wheat dough, the little thing of pizza sauce, and mozzarella cheese from the refrigerated section. 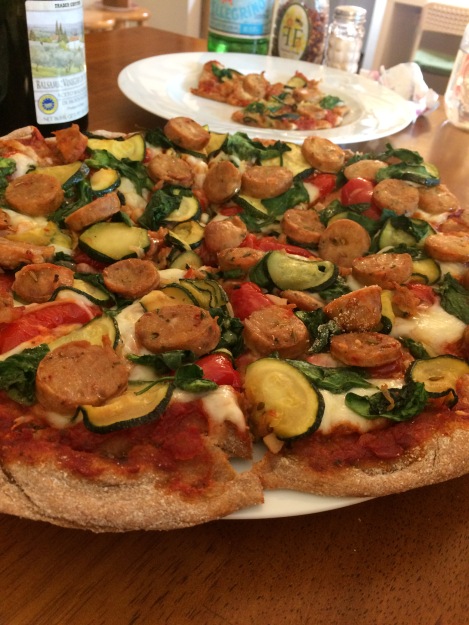 I also grabbed spinach, zucchini, and spicy chicken sausage for toppings. I had to run back out to get garlic, which was a total pain, but it’s basically an essential ingredient for pizza in our house, and it gave me an excuse to pick up a bottle of wine. I cooked the freshly minced garlic in olive oil, and then rubbed the crust with it. The bag of dough makes enough for two pizzas, so one pizza got tons of garlic and one didn’t get any. I kind of preferred the one without garlic, since it was a lot simpler. The one with garlic also got sautéed San Marzano tomatoes I had laying around, and shallot. 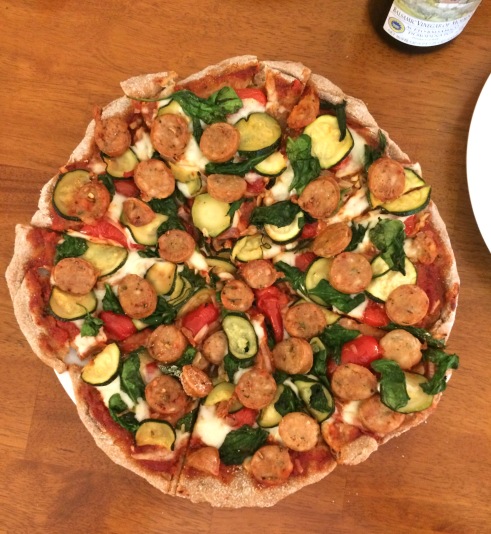 It might seem like a big ordeal to make pizza like this, but it only takes about an hour total, especially with the help of the pre-bagged dough. They also sell pizza dough like that at Whole Foods and tons of other places. 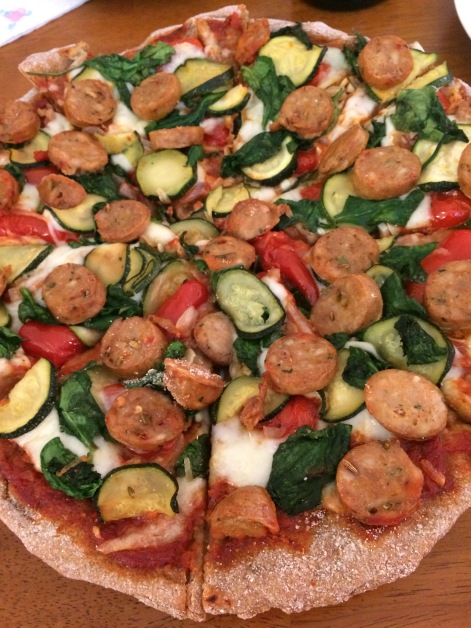 I cooked the shallot and garlic first, then added the tomatoes, and steamed my zucchini separately in a wok. Then I added the spinach last, since that stuff wilts so fast. Then I put all my finished ingredients in bowls, dumped a bunch of whole wheat flour on my cutting board, and started tossing the dough. I used to make Scott do this step for me, but it’s really not as hard as I used to think. You just hold it by the edge and let it fall down (thanks gravity) and it stretches naturally.  Tip- keep adding more flour to help it. I stretch it and toss it and eventually it’s ready to get stretched over the pizza stone.

That’s the simple pizza (above), without the garlic. I ground a bunch of black pepper on top, and it was so good! That one also baked much faster, since I just put it on a round, metal baking sheet instead of my pizza stone. Pizza takes so much longer on the pizza stone- why is it better to use it again? I get so impatient and check it ten times until it’s finally done! 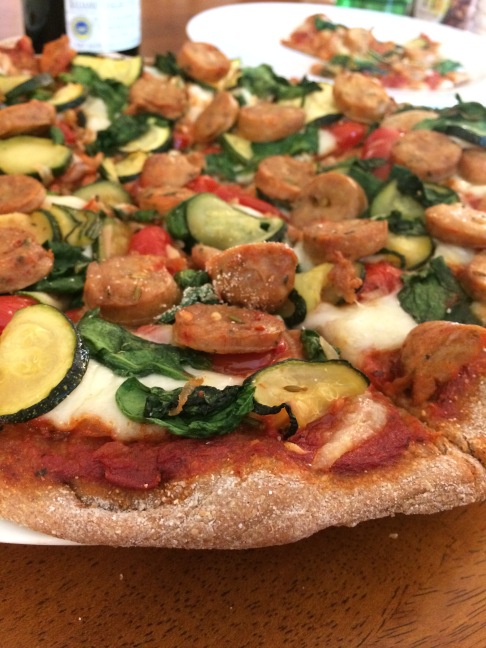 I paired it all with some white wine, and ate way too much. I also drizzled balsamic vinegar on top, which adds some cool dimensionality to the pizzas.

The best part about making pizza like this is there’s always leftovers. Suddenly I know what I’m having for lunch the next few days… if it lasts that long. It’s really fun to make two different pizzas, and see which one came out better.

Have you ever made pizza at home? It’s not too hard and it’s really fun! You should try it!