I used to drive up to the ski town of Windham, New York with my family for vacation, so I’m no stranger to the three hour car trip upstate (but surprisingly I’ve never skied). I am, however, unaccustomed to a big crazy family, the kind who has to take two cars and who you can place bets on. Case in point- the handful of us who were ready on time and helping load the car decided to bet on how soon we’d actually be ready to go.

“Mom said leave here by 9. We’ll be on the road at 10:05. No. 10:30,” Scott said. We were dressed for the convent and waiting around in the driveway. Once the older brother sets the tone that it’s betting time, even the most cautious among us want to get in on the action.

Maddie’s boyfriend Andrew was next to guess (Maddie is the middle sister and the one who used to live with us). The other non-family member on this trip looked at the suitcases scattered around the driveway. He and I were the outsiders, trying to get in the mix and stay out of the way both, as significant others of the two siblings who moved out of New York to Austin, Texas. Andrew hesitantly guessed that we’d be on the road by 9:30.

In my house, if my dad said on the road by 9, we’d be buckled in and out of the driveway by 8:49. My head was kind of exploding as I watched people yell at each other, chain smoke, and our estimated departure time came and went. Pretty soon, Scott won the bet. It was closer to 11 when we pulled into the gas station for coffee and a breakfast of Clif Bars.

We called our car the Travis County Squad, since the four of us live in ATX, with the exception of Scott’s dad, who was driving. We rode through Long Island and Queens, crossing bridges and drinking 7-11 coffee. The other car had Scott’s mom, his two siblings that live at home, and the baby. An hour or so in, we were stopping at a rest stop for the baby.

Normally I wouldn’t bother mentioning that we stopped to pee, but we stopped one exit away from the indoor skate park my parents used to own! I was running around in my church clothes, texting my mom and gushing about how close we were to our old business, my favorite pizza place, and by extension, my HOMETOWN! From there on out, we took the same drive my family used to in order to get upstate and I was soaking in the nostalgia.

I should explain that Scott’s 25 year old sister Leonora became a nun about four years ago. She can only have visitors four times a year, so this trip was a big deal. Scott’s mom planned the whole thing, and got both Maddie and Andrew and Scott and me to fly out for this visit.

The best part was, Leonora had NO IDEA THAT ANY OF US WERE COMING.

She never knows who to expect during visitation, since random old friends and the extensive network of cousins have been known to trip up there. Maddie’s been before, as well as the other two siblings and the baby. Scott had never been, and Leonora definitely didn’t expect him.

Before we left, we planned on how to surprise her best, and Scott’s mom came up with a plan that I loved.

I LOVE surprising people with visitors. One of my proudest moments was when I pulled off a surprise for my grandfather in Florida over spring break. I visited him every chance I got, so it wasn’t unusual for me to book a flight and spend a week with him. I arrived at his place and we hugged and were so happy to see each other. Then I said that I forgot a piece of luggage in the hall, and he thought nothing of it… until I came back in with my brother!!! Poppy was so happy and shocked, since Tom flew in from DC and I flew in from Austin. The three of us had a whole week together, and it was just plain awesome.

When we got to the convent, the family let Scott and me out by the front while they went on to park. We had decided to let Leonora think that Maddie and Andrew were the surprise! She was waiting around for her family to come, and saw the cars and headed over there. She was so happy to see her sister and the boyfriend she’d heard so much about. She was greeting everyone, and thought it was a little weird when her brother AJ wandered away abruptly.

But AJ was coming to get us!

So the three of us walked towards the back lot, under the bright sun and lush, green mountains. AJ went on ahead and Scott stepped out of the line of trees.

Leonora looked right at him with a big smile plastered on her face. Then she looked away, back at her family. Then she did a double take and realized this guy walking towards her was her big brother.

She ran towards him and they hugged, and she started crying. She said she hadn’t cried since the last time she saw him.

Scott and Leo were always close, and it made me sooo happy to see them together. Plus we got to reenact that incredible double take all day! 😂

We had a great first day at the convent. We ate, explored the grounds, met lots of nuns, and played music in the gazebo. I got to spend time with Scott’s mother and take lots of photos. I loved seeing Leonora as well. The one and only time I’d met Scott’s family previously, five years before, she and I had an instant connection. In another life, maybe she’d live in Austin and we’d be best friends! But seeing her home in the mountains was amazing. 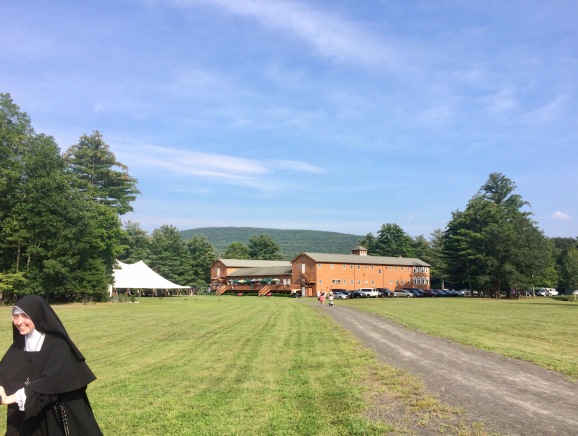 Another bonus- everyone liked my maxi skirt! And in a turn I found quite funny, all the nuns commented on how beautiful I looked (they don’t even have mirrors in the bathroom- looks are NOT emphasized in their spiritual practice!). It made me realize that nuns are just people.

We still had two more days at the convent!

Did I lose my mind by the end? Did the holy water burn the atheists in the group? Tune in to find out!