Austin, Texas finally has everything. At least as far as cupcakes are concerned.

Sprinkles Cupcakes has arrived at the Northside district of the Domain. The fun outdoor shopping center in Austin has been attracting more residents, restaurants, and cool shops lately with its expansion. Now, it has Sprinkles. I found out Sprinkles was opening one day before the grand opening date, which was so lucky. I would have hated to find out a few weeks after, when the buzz was dying down and it was just a part of north Austinites’ regular routine. I have been waiting to try Sprinkles cupcakes for YEARS, so I knew I would be going to the grand opening.

I really like some grand openings. I went the day Trader Joe’s opened in Westlake- the first one in Texas. I waited in a line so long that we were in the cheese aisle to buy my basket full of stuff. Austin has never seen TJ’s lines like that since, even though I know insanely long lines are a regular part of NYC peep’s grocery shopping experiences. I also went to the opening day of Whole Foods on William Cannon and Whole Foods Domain (just different Whole Foods around Austin). And H&M. I don’t even like crowds and work hard to AVOID going to busy places normally, so I don’t know why I’m so eager to hit up a place with bougie foodstuffs on Day 1.

On Sprinkles day, I checked Instagram all day and saw the line wrapped outside the store. I saw photos of the 24-hour cupcake dispensing ATM that made this LA cupcakery famous. Then finally, it was my time to go. I wanted to go around 6, when I figured most people were eating dinner and waiting to get cupcakes after. There was still a HUGE line, but it was manageable.

Scott and I got in line and people watched and waited to get inside to catch a glimpse of the magic cupcakes. We had once almost driven to Dallas JUST so I could go to the Sprinkles in their Galleria. Sprinkles was also on the top of my list of reasons to visit LA. I could not have hyped these cupcakes up any more to myself. I was literally setting them up to disappoint. Scott is a person who doesn’t even like cupcakes unless they’re “perfect” and fit his very specific description. So we waited in the cold with very, very high expectations.

Once we got inside, after about half an hour, we could see the glass case full of perfectly iced cupcakes. I had been stalking Sprinkles on Instagram for years, and they looked even better up close. 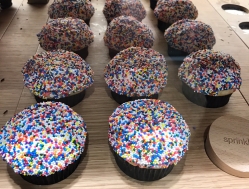 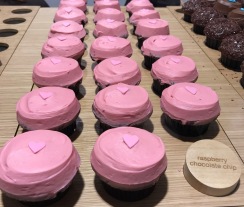 They even had minis! I had read the ingredients online ahead of time (since I don’t eat hydrogenated oils or stuff like that and have to read ingredients for everything I eat) and knew every item was fair game. Black & White was a belgian dark chocolate cake with creamy vanilla frosting, according to their site, and tempted me due to my New Yorker love of bagel shop Black & White cookies. They had banana, vanilla, coconut, red velvet (what they’re famous for), Sprinkles (That’s like when you read a book and they finally drop the title of the book in there somewhere, or when they say ‘We’re Gilmore girls’ on Gilmore Girls!), chocolate marshmallow, and the seasonal special raspberry chocolate chip. They were out of some of the normal flavors that are supposed to be available on Saturdays. Their menu rotates everyday and you can check online to see what they have. It was truly awesome to look in the case and pick out which ones we HAD to try.

After paying admittedly a lot of money for food products completely superfluous to actual human nutrition needs that we didn’t even know if we would like or not (but fun and pleasure, tho!!!), Scott and I headed outside, where the line was even longer and hyper children were running around screaming. We walked down to this beautiful spot in the Northside of the domain.

We got a vanilla with sprinkles, a mini red velvet, a chocolate marshmallow (because I LOVE marshmallow and they were out of milk chocolate) and a SPRINKLE. We sat down and took a bite with the little wooden sporks they provide.

Have you ever hyped something up to yourself so much, like a concert or date or whatever, and then it BLOWS AWAY YOUR EXPECTATIONS? That’s Sprinkles for you. Best cupcake I’ve ever had, and I’m a cupcake person (as opposed to an ice cream person). (This is how we should see ourselves as humans- not by race?? or religion?? Are you a pie person or a cookie person?  Where will we file those who like baklava best of all? Must work out how to sort people who hate sweets. I’ll get back to you.) I loved the surprising marshmallow filling under the chocolate ganache of the chocolate marshmallow one- it wasn’t marshmallow flavored frosting, it was straight up the inside of Hostess Ding Dongs. The red velvet was great. The sprinkle had a delicious funfetti filling but the non-pareils were a bit crunchy. The vanilla was WHAT DREAMS ARE MADE OUT OF. Am I getting too excited in this post? Well, if you think that you need to go eat some cupcakes. Get on my level.

Scott even agreed with me. Mr. Not A Cupcake Person said they were incredible and just his exact taste in desserts. I knew I would take every visitor to my town here from now on. If Scott likes them, everyone will. We used to go for cupcakes once a month at Hey Cupcake near my old house, and trust me, he couldn’t have cared less. He wouldn’t even take a taste of the chocolate icing if I offered him a bite. I mean, really now. That’s the kind of not-a-cupcake person he is.

I am obsessed with Sprinkles Cupcakes and will continue to interval run, walk my hilly neighborhood and hit the gym in order to balance out my new cupcake lifestyle. If you live in Austin, get there ASAP. I promise they’ll have a flavor you like. Apparently they have good ice cream and stuff too, but to read about their sundaes, you’ll have to go to an ice cream person’s blog.