I am pretty lucky for the fact that I can wake up when I have to, no matter how early. I won’t fall back asleep. I won’t sleep through my alarm. If I have to be downstairs hailing a cab by 5:15 AM, I’ll be there.

No, wait, that sounds dramatic. Last week when I was leaving Montreal, I woke up at 5 AM. I had to be at the airport well before 6, and it was 30 minutes from the hotel. I bolted out of bed and started chugging water to wake myself up. I turned on the Nerdist Podcast interview with Aidy Bryant for company. I did my makeup as fast as possible, packed the last of my stuff, and then…

It took me a whole five minutes to zip up my suitcase. Nooo!!

I made it downstairs to the lobby by 5:20, and there was no one there. I was told there would be ‘night men’ and they’d help me call a cab if there wasn’t one in the driveway. Well, I don’t know where the night men were that morning. But they weren’t there, and there weren’t any cabs in the driveway. I had my passport safely tucked in my pocket, and my Canadian cab fare, and I was looking around…

Luckily I saw a cab. I crossed the street and the cabbie ambled out, putting my bag in the back. He doesn’t speak much English and had a thick accent. We headed off to the airport, and the only trouble was when he asked if I’m flying by Air Canada and I replied that the air conditioner felt fine. Well. Language barrier plus no coffee. I handed him my weird plastic Canada money and ran off to check my bag. 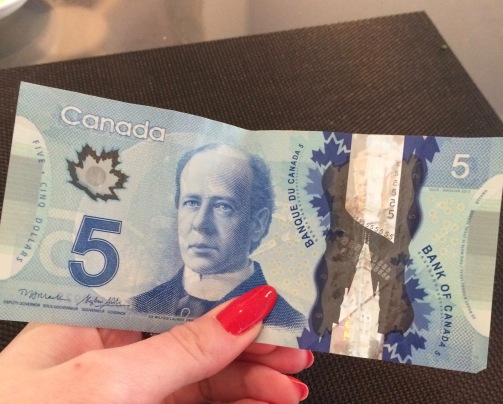 Luckily I figured out customs and all of that quite easily. I couldn’t tell if the men in customs were flirting with me or grilling me when they asked so many questions about my trip. It was kind of funny. 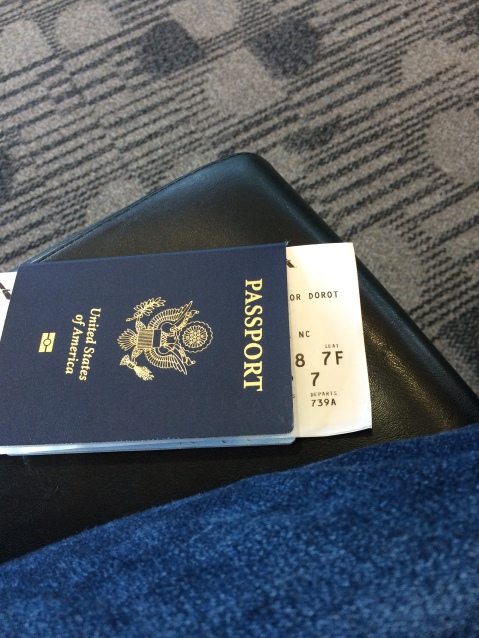 I made it to my gate! There are fewer bathrooms in the airports in Montreal than in American cities. I feel like there’s a bathroom every ten feet in the Austin airport. 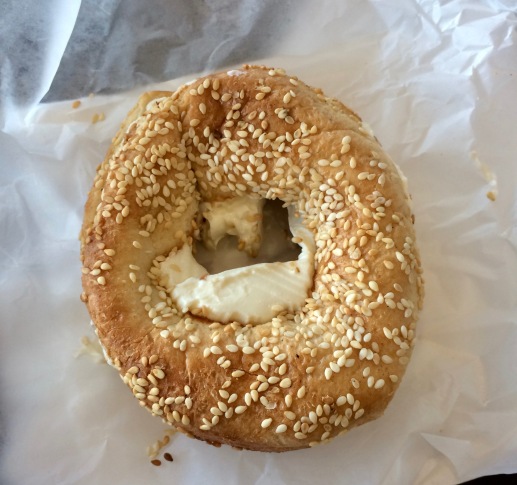 I did the last thing on my Montreal bucket list, and that was try a famous Montreal bagel. Montreal is known for their bagels, which are nothing like New York’s. They’re sweeter, denser, and have a huge hole. A huge hole is like a NY bagel sin. There was a bagel shop near my gate, and I got to try a bagel with light cream cheese (which I even ordered in French!) (Poorly, though!).

I also got an iced chai tea latte since it was just way too early to deal with hot coffee. I ate my breakfast in the super comfy lounge chairs in the Montreal airport, and wandered around, looking at all the different Canadian stuff they had for sale, like ketchup chips and all dressed chips and British chocolates. 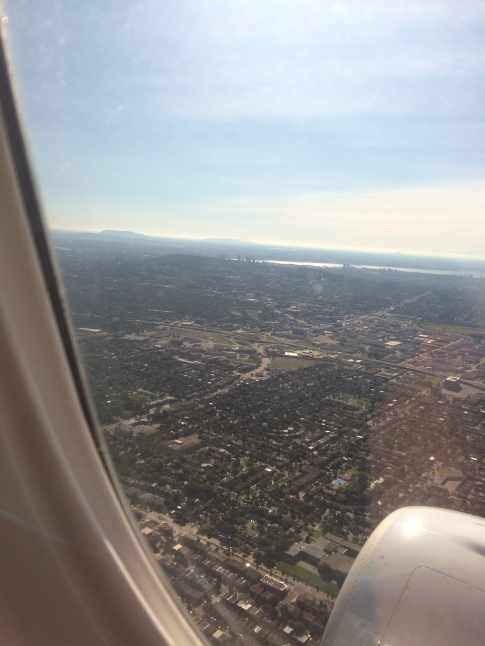 We sat on the runway for two hours, which SUCKED. We boarded at 7:10 AM and didn’t take off until after 9. I also didn’t really like the book I’d packed. Once we took off, I slept until we landed in Charlotte. I almost never sleep on planes, so I was glad I could. I think it’s because I’d had tea instead of coffee. 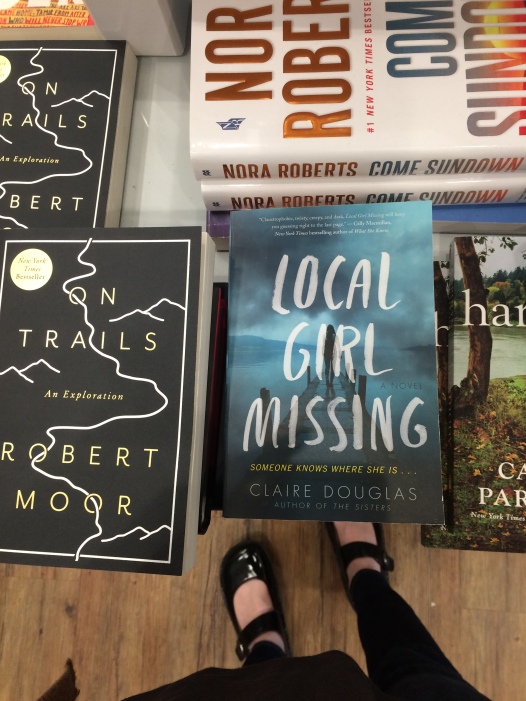 In the Charlotte airport, I shopped for a different book and ended up with The Husband’s Secret by Liane Moriarty, since I’d liked Big Little Lies so much. I ate lunch at a restaurant solo and had a dope cobb salad. Eventually it was time to fly to Austin. I wasn’t that excited about this leg, since I had a middle seat in the back of the plane.

I thought about getting a coffee from Starbucks, but it’s so expensive in the airport, and this is what I really wanted, anyway… Another cup of Tim Hortons coffee! 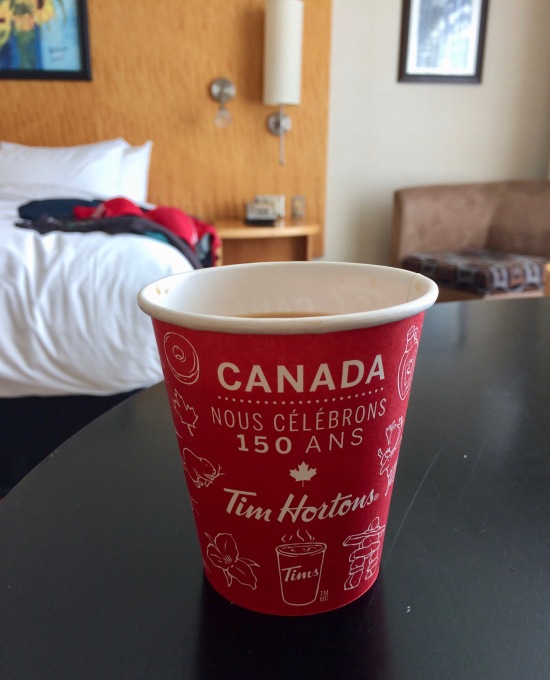 I was in between two dudes, and the flight to Austin felt so long. We also had to deal with the time difference from east coast to central time, so when I thought we were almost there, we still had two hours left. Why is that? Why are there always two hours left on a super-long feeling flight? 😭

I landed in Austin feeling sick. The last hour of the flight was bumpy. I surprised myself by staying out all day, and not going to bed until midnight. I didn’t just go home and crash out.

The next day, I wore my jaunty French scarf and missed Montreal and my aunt.

It was a little hot for the scarf, since I’m not in that sweet 72 degree weather anymore. 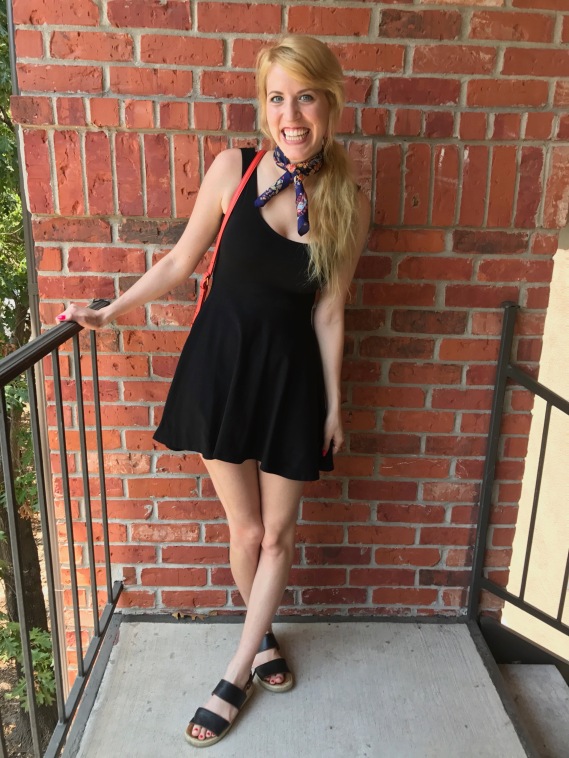 I had such a good time in Montreal, and didn’t really know places like that existed. It was so peaceful and the people were so friendly and normal. It was like New York, and looked like Europe, and the culture was wonderful. Now I want to learn French and move there. Sure, it’s 20 degrees every day in the winter. But maybe I could learn to ice skate! I could learn to ski! I want to bring my boyfriend there, and I’m so glad and grateful my aunt invited me. It was just a beautiful trip and I loved it. All of the little travel details are easy to write about and complain about, but really I was grinning through the whole experience. It was the most extraverted I’ve ever felt! Traveling brings out a different side of me, and Montreal made me realize how much of the world there is to see.

Have you ever been to Montreal? I want to go back next summer!