Healthy eating is a really important part of my life, but not in, like, an annoying way. I find the habits I’ve adopted over the years to be so logical and simple that it doesn’t feel like I’m this crazy, health-obsessed person. It doesn’t make my life that much different or difficult than anyone else’s, unlike my raw vegan friends, or people who keep paleo. That shit is hard.

Healthy eating is so pervasive now, and there’s sooo much bad information, impossible suggestions, and a lack of sustainability for most people out there. I like the way I eat. I’ve maintained the same weight for over ten years this way, with a fluctuation of only five pounds in either direction. My exercise routine varies a lot- sometimes I hit the gym four nights a week; sometimes I’m running a lot; and sometimes I’m just walking a little. Walking most days a week and strength training 3-5 days a week is my ideal, but that hasn’t happened in a bit. With mental health problems, sometimes I’m not exercising at all. So, my maintenance is mostly attributed to the way I eat.

There are some pre-cursors to these tips that sort of go without saying- drink water, learn to cook, cook most of your meals at home (I cook dinner at home five or six nights a week on average. This helps me know exactly what I’m eating, which we all know is tons harder at a restaurant), and stay committed to eating better.

I hope some of these tips help!

Every dinner I make requires at least two vegetables, but four is not uncommon. Just think about whatever you want to cook for dinner in terms of what vegetables you’re going to be eating! I eat where each bite is equal parts vegetables and carbohydrate (protein is usually there too in the form of eggs, beans, or meat, but I’m not as worried about that when it comes to meal construction as I am my fiber/whole grains and vegetables).

At least once a week I make pasta: I’ll use a jarred sauce (so easy & there are so many good ones), whole wheat penne, little bit of parmesan on top, crushed red pepper, and ALWAYS broccoli (2 heads), zucchini (1 whole one), and peas (1 cup frozen).

If I’m being super lazy and am just having eggs, I’ll wilt a ton of spinach or sauté half a zucchini and eat that on the side. Or roast some potatoes in the oven, like breakfast for dinner. Even lazy meals require two veggies.

You just have to think of what veggies you like and what would go well with what you’re eating.

2 ❁ Only cook vegetables in water.

Do this to avoid the unnecessary calories from oil! This is SOOO easy and surprisingly most people do not do this! Just cut the veggies up, put them in a wok, add a splash of water, and cook it out. You might have to add water a bunch more times as it cooks out, but eventually the veggies will be done and they’ll taste great. If you taste them while they cook, you’ll be able to pull them off the heat at the done-ness you like. I’ve never had my broccoli come out all mushy the way steamed broccoli does at restaurants. It’s always al dente, the way I like it. Some veggies have different cooking rates, so you may have to cook things separately. Here are some vegetable cooking combos:

Carrots + potatoes (I use them in curries or pot pies, and they’re almost always done at the same time)

Broccoli + zucchini (broccoli is a touch slower than zucchini, but I cut mine up small so this is never a problem)

Spinach (always throw it in last, and you’ll always need more than you think)

The options are out there and just as abundant now as their white counterparts. After all these years, I literally get sick when I eat white pasta and it tastes like rubber to me. In case you think whole wheat pasta or brown rice is not as tasty, you’ll actually adjust quite quickly. Buy whole wheat pasta, brown rice, brown rice pad thai noodles, whole wheat breads, etc. Be exclusive with this. Think, this whole grain version is for me. That other stuff is for other people. It’s an easy mindset to stick to, and work to find what brands and kinds you like.

They aren’t boring. I used to think that salads were veering into disordered eating territory, like there were a million more exciting things I could make that weren’t “diet food.” But now we eat salads at least twice a week in my house. I always like to pair my salad with something, though, so I don’t feel all sad and deprived. As a side, we might do the cheeseless pizza from Amy’s Organics, or whole wheat pita, or crusty bread. Usually, my salad will be red leaf lettuce, spinach, carrots, cucumber, feta cheese, sauteed chickpeas (they’re high calorie but it’s good protein for me), and shallot vinaigrette. Use a low calorie dressing that isn’t too high in fat, but don’t buy those dumbass chemical Walden’s Farms ones (artificial sweeteners are NOT good for you). Bolthouse Farms greek yogurt dressings are great, or you can make your own dressing at home (there are tons of amazing vinaigrette dressings online!).

My partner has a Greek salad every time, with feta (he tries to use a LOT and veer away from this whole healthy eating thing…), pepperoncinis, olives, cucumbers, tomatoes, spinach, lettuce, red onion, dill, and sometimes grilled chicken. That’s a lot of veggies! He’ll eat a whole tomato and a half a cucumber in one salad. 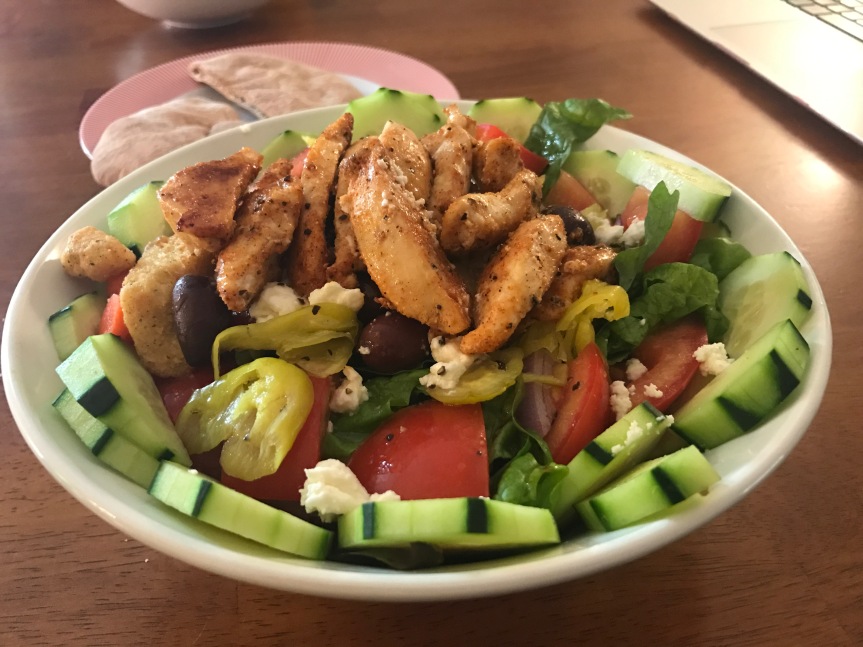 I once read that trainer Jillian Michaels advised clients not to eat swordfish or PINE NUTS. I was like, god, RELAX, it’s fine, Jillian, they’re just pine nuts. But really, the theory is on-point. If you’re eating something and it’s super high calorie, you’re not likely getting the pay-off from it you think you are. You might be estimating that the meal is healthier or lower calorie than it actually is. So, I would suggest being very careful with: olive oil, coconut oil, butter (I have never bought or used butter the whole time I’ve been cooking- if a recipe calls for it, it’s probably not healthy! So I swap it out or skip it!), peanut butter, cream, mayo, pesto, nuts. Stuff like that. I’m also careful with hummus, since it gets high cal quick, and cheese. Soft cheeses can be pretty easy to overdo it with.

I know I just veered into the MOST OBVIOUS HEALTH ADVICE area, but hear me out. This tip is all about compromising with yourself. Sometimes I really want fried tofu for my dish- like, fuck the baked tofu today. I want panko-breaded, coconut-oil-fried crispy tofu. So I’ll compromise. I will bake half my tofu and just pan-fry some of it, and then I’ll really savor the fried tofu because there isn’t a lot of it, and usually I’ll find that the baked tofu isn’t actually that dissimilar. Same thing with most of my high-cal/unhealthy cravings- if I make delicious ravioli in garlic and olive oil with grated parmesan on top, but add my two veggies AND make myself eat a small salad first, I’m doing a good job. I got my fatty ravioli, and actually still managed to eat a healthy dinner. I’ll eat an apple before a handful of chips. Drink a glass of water before attempting a cupcake. Stuff like that!

This one is so easy to pull off. Switch to smaller plates. I NEVER use my dinner plates or big bowls. A salad plate for everything! Then the plate is full, and it’s always enough food for me (my boyfriend has to obey this trick, too, and he’s a big 6’3″ dude). If I’m making burgers (I just tried new quinoa veggie burgers that were sooo good), I’ll cut the rolls in half so I have to toast the other half up later if I want more. By the end, normally I’ve eaten enough that the extra step to get more isn’t worth the effort. Turn the burners off right after you’ve served food so seconds have to be microwaved (wah wah) or lukewarm. Make yourself one egg. Measure stuff out if you’re new to this and can tell you’re probably eating too much. I scraped some vegan ice cream into an actual measuring cup the other night, just to make sure the 120 calories I was giving to ice cream in my head actually matched up with the amount I was putting in my mouth.

I was originally just going to do 5 tips, but I came up with 7 and thought of tons more!

I’ll do a part 2 soon, and hope that you found this stuff helpful. Let me know if you liked this. I am happy I finally posted about healthy eating.

Take care of yourself. You are so important.